These waffles were delicious, but required a big time investment, and their fussiness indicates to me that they’re fairly sensitive to variation. (8 1/2 TB of butter? So use that whole stick, then bust open another one so you can shave off 1/16 of it for that extra another half tablespoon. Fussy.)

On top of all that the cleanup was fussy too. I wound up heating up the iron again then dredging up some of the big pools of carmelized sugar with Q-Tips. Annoying.

Fortunately there are many recipes under the sun. The waffle iron came with a few, including this one that someone replicated online. It’s also a night-before recipe, but it’s one that takes only 10 minutes and has only one rise (overnight). Here’s what the dough looks like the next morning: 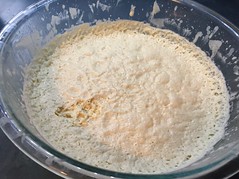 They’re a more traditional batter so cooking isn’t quite so tricky either. The results are excellent – just a little bit of sweet, and balanced between doughy and airy. So I think the reward-to-effort ratio is higher than the other ones, though it’s certainly possible that with practice (and maybe a stand mixer) the effort for the Liège waffles will diminish. 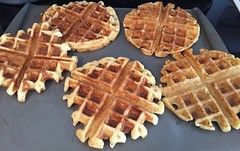 Finally, part of the answer to “how do I cleanup after Liège waffles?” is: make more waffles! Unless you have a waffle iron that can detach the plates for cleaning, you’ll inevitably miss some of the hardened sugar. But the next waffles you make will absorb those little bits and what you’ll have left after that batch will be markedly cleaner. Love those types of cleanup!

A new podcast that started since my last review is Invisibilia. It’s set a very high bar for itself with the first few episodes not only in production quality and storytelling, but in presenting me with moments that make me question fundamental things.

For example, the most recent episode (Entanglement) talked at one point about humans’ ability to mirror one another, unconsciously. Small things like physical mannerisms, ways of speaking, even autonomic processes like breathing. But also large parts of our identity – how we interact with others, our emotional states.

And two psychologists came to the realization that treating people is even harder than they’d previously thought because of these entanglements. In fact the very notion of you as an individual gets called into question because you’re a constantly changing amalgam of your environment, as is everyone around you.

There are definitely some WTF moments when they’re explaining unusual conditions that people have, but they don’t leave it at that and dig into what those conditions illustrate. Wonderful stuff, and something that everyone can get something out of.

Next: Spreadsheets!
Previous: Creating buckets for relative minutes in SQL