Charlotte's Web and the blur of nostalgia 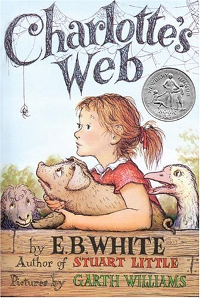 This all happened after reading the book to Ella for the first time this summer. While it was one of my favorite books as a kid I never really thought about why that was so . Re-reading it with Ella brought it into new light: it's direct and doesn't talk down to kids or sugarcoat death or pain or rejection or heartbreak. But it moves on from those things as well. It's also remarkably free of self-awareness, unlike a lot of modern kids media.

So when Ella said she wanted to watch the movie, I figured she'd seen something about the animated version somewhere. Which I thought was fine: I didn't remember it very well, but I had a vague feeling of nostalgia around it.

But when I heard it was a recent production, and had a CG spider with Julia Roberts doing the voice, I feared the worst: lots of singing and probably dancing, cute animals, pop culture references for the adults, and maybe Charlotte wouldn't even die. Grumble gumble. Surely it wouldn't be as faithful as the barely remembered version from my youth?

So when we watched it that nagging feeling of nostalgia pulled me into playing an internal cranky old man monologue for a while ("Julia Roberts doesn't sound right", "That guy was a jerk-off in Rising Sun", "Where did those crows come from?"). But then... then I stopped, and it worked. Really well. And I got why the crows were there. And the CG was good but spare. And just about everything that was great about the book was in the movie, including the most important part: the tone.

My sister got Ella the animated verion for Christmas. And when she visited over New Year's we all sat down to watch it. I was keenly interested in how much better it would be than the new version.

And it wasn't. At all. In fact, it was much worse. Lots of singing, very little character development, almost no tension between the characters at all. And there was a modern feeling adult-oriented camp having Paul Lynde voice Templeton. It added a layer of snark without much else. Nostalgia lied to me, and I'm glad I was able to see through it.

So, here are a few more reasons why the new version is much better than the old:

The biggest one: why did Charlotte do this for Wilbur?
Old version: Who knows? She comes up with the idea so soon after meeting him that it seems she was bored and looking for a project.
New: They took time to establish the friendship between Wilbur and Charlotte (just them talking, really) and, crucially, made Charlotte an object of disgust among the other animals. The idea that Wilbur's exuberance (for life in general and for Charlotte in particular) wins over the other animals and make her an equal to them is central. It gives reason and weight to her decision to go to the fair, which the movie brings out explicitly when (I think) one of the cows tells her she can't do it because of her babies.

Charlotte's appearance in the two is instructive as well. In the animated version she's almost elegant: like a bug who's got a classy hat on. But in the new version she's... well, gross. All her eyes are looking at you and she's got bits sticking out here and pincers chomping there. And over time, just like for the animals, that falls away for you, and you see her swaying in the breeze, weaving and talking to herself. Or gathering the animals together for a pow-wow, or telling Wilbur she can't make it back to the barn, and it's her voice that rivets you. (Sorry I doubted you Julia.)

Templeton in the new version is more complicated. In the old version he protests when asked to do something, but it's so weak and short that you know he's still going to do it. In the new one you're not really sure. Actual tension. Plus I think Steve Buscemi was the perfect voice.

The old version has a dumb, completely unproductive relationship between Wilbur and the 'runt' of the geese, who had such an annoyingly cute name that I've wiped it from my brain. In its place the new version brought out the characters of the pompous sheep (especially Samuel -- John Cleese), the dumb but faithful horse (Robert Redford), and the wise slow cows (Kathy Bates and Reba McIntyre).

Fern's development gets short shrift in the old version. In the new one she not only spends more time at the barn, but how her mother reacts to her is played out more. (Beau Bridges makes a brief but great appearance as the wise country doctor.) Her worries about Fern being antisocial/tomboy are carried forward later in her surprise that she's wearing a dress to the fair. This idea that kids grow up while you're worrying about them is one that I think resonates pretty powerfully with parents.

There's a voice-over line -- Sam Sheppard, nice! -- after the fair and when the winter comes about a spring pig seeing snow for the first time. Hugely poignant, completely missing from the animated.

I didn't like how present Henry Fussy was in the old one -- they tried to introduce a "mom's keeping him away" theme, then he went away for a while to his grandfather's and came back more "natural". In the new one it's much more subtle, a hint here and there and then at the fair he's got a ticket for her to ride on the ferris wheel. Smooth operator.

And when the new movie deviated from the book it did so in elegant ways. The two crows ( Elwyn and Brooks, nice homage) provided comic relief, Ella loved them. Even now whenever we see a crow we caw and say, "Corn!"

Next: Goodbye Kim
Previous: Next and previous JavaScript months