One of the first things I sorely missed from my Nexus 4 was the keyboard. Which I knew was going to happen – one of the things keeping me away from iPhones was the lack of third party keyboards to enable swiping. That feature in iOS 8, combined with the larger phone, wound up pulling me over.

Such a keyboard doesn’t come with the phone, so you need to install one. There are loads of reviews out there looking at multiple apps that do this (just a few: PCMag, Digital Trends, Forbes GeekWire, VentureBeat) and of course they’re of varying helpfulness. For my purposes, someone who had used such a keyboard on Android was a better source than someone who had built up quick habits on the iPhone keyboard over years.

In addition to writeups like the above there are, of course, reviews on the App Store. I don’t have a lot of context about reviews (beyond hearing folks talk about it) – how much weight to give them, etc. Overall they weren’t helpful at all, though one part of them caught my eye. It seems like there are more people freaking out than they would on Android because the phone can share things with a server. Are Android folks just used to Google’s algorithms consuming everything you do to provide a better experience? Probably not.

Anyway, a few things about the couple keyboards I tried.

This had very good reviews. But the practical use was hugely frustrating. It had a terrible time picking up intermediate letters on the swipe and the recommendations were nonsensical. For example, trying to swipe the word ‘points’ was an exercise in futility. Not only did it only ever recognize ‘pints’, no matter how slowly I went, but it refused to offer up ‘points’ as a suggestion.

To compensate I found myself swiping slower and slower, using the visual cues (little blue dots over the keys) to ensure intermediate letters were captures. And it was better. But the point of these keyboards is to type faster, so slowing down just to make the app work made no sense. 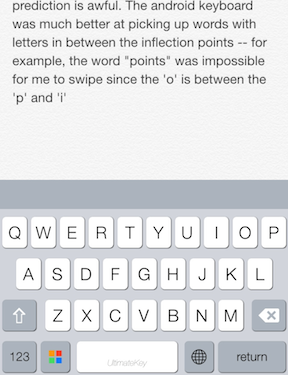 Some of the reviews referred to SwiftKey’s Android heritage so, despite the pretty terrible reviews, I had high hopes. And they were redeemed. Not only is there a punctuation key (‘.’, which a long-press option for five other common ones), the keycaps change to lower case! Predictions are excellent and smart, and they take into account intermediate letters.

One of the only downsides is that there’s no emoji keyset. The Android keyboard integrates them with a long-press on return, maybe that’s an option going forward?

After using this for just a couple of minutes I was hooked. We’ll see how well it works over the long haul. 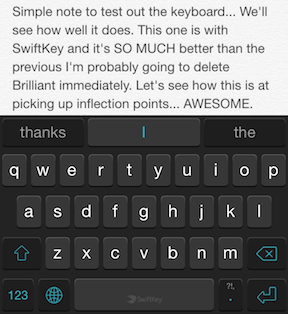